Two members of EASTRS will receive a Charles Weniger award on February 20, 2020. Helen Pearson and Michael Pearson have been honoured for their significant contributions to the Adventist Church and Community. The award ceremony will be streamed live via the Loma Linda University Church (lluc.org). 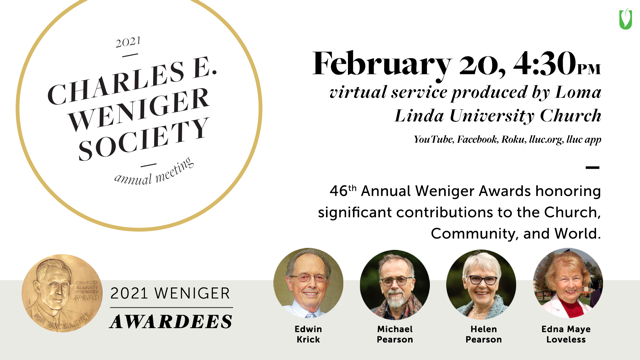 Charles Elliot Weniger (1896-1964) was a professor at the Seventh-day Adventist Theological Seminary in the 1950s.  He was both an inspiring teacher, who influenced an entire generation of students, and a gifted speaker. Ten years after Weniger’s death three of his friends decided to establish the Charles Weniger Society for Excellence “to honor his memory and the qualities of excellence that were paramount in his life.” For over four decades the Society has recognized, with a special award, individuals in the Adventist Church, with similar traits of character, who have made a significant contribution to the church and the world. Among the recipients of the award have been Jan Paulsen (2000), George Knight (2009), Herbert Blomstedt (2011), Bert B. Beach (2015), and T. Richard Rice (2018). Among the awardees in February 2020 were Reinder Bruinsma and Andrea Luxton. In addition to this, the Society also annually awards ten undergraduate students with a scholarship.