From 24 to 28 April 2019, about fifty European theologians from all over Europe, representing in particular the various Adventist theological faculties, gathered for four days of conferences, reflection, exchanges and visits on the theme of pastoral ministry and ecclesial leadership. This ETTC (European Theology Teachers Conference) occurs traditionally every two years, each time on a different Campus.

The Collonges Adventist University (France) welcomed with great pleasure and attention the trainers of future pastors who have been very receptive and responsive to the conferences that addressed the issue of ministry from different angles. To introduce the subject, Walter Alaña, Dean of the Adventist Theological Seminary in Peru, present in the context of a new agreement between Collonges and Lima, addressed ‘the theology of pastoral ministry from an Adventist perspective.’ 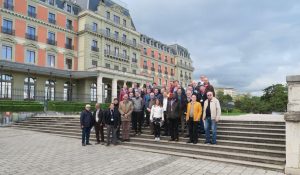 The paper presentations would then follow one another to enrich the topic. Miguel Guttierrez (Villa Aurora, Italy) discussed the ‘prophet as a model of spiritual leader;‘ Oldřich Svoboda (Sazava, Czech Republic) explored the New Testament vocabulary of ecclesial leadership; Ivan Milanov (Newbold, England) compared ‘prophetic and cultic leadership;’ while Nestor Petruk (Sagunto, Spain), addressed a missiological dimension. Richard Lehmann (Collonges, France) approached the issue of the ministry from the perspective of the shepherd, sharing lessons from his long experience. As well as Reinder Bruinsma, who explored the question of ‘authority and conscience’ in relation to the freedom of the pastor. Alexander Schulze (Friedensau, Germany) considered the ministry in relation to the challenge of youth and its integration into the Church; a reflection usefully completed by Bjørn Ottesen (Newbold, England) on the issue of young pastors and the question of authority from participation and influence. Daniel Olariu (Cernica, Romania) focused on the happiness of ministers. Rudy Van Moere (Belgium) addressed the question of the ’pastor’s dilemma in a postmodern society,’ while Gabriel Monet (Collonges, France) concluded by showing the relevance of an evolution in the conception of the ministry in a changing world.

During the business meetings Tihomir Lazić was elected as President-elect and the journal Spes Christiana was adopted. A yearly membership fee of €15 was agreed, which will be waived for non-employed students. Finally, Budapest was chosen as the location for the next ETTC in 2021. 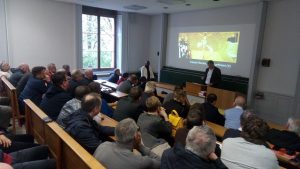 In addition to these stimulating conferences, an afternoon at the Palais Wilson in Geneva, home of the Office of the High Commissioner for Human Rights, provided an opportunity to understand how the working commissions of this important United Nations body function, but above all to be sensitive to the “Faith for Rights” project, which seeks to encourage faith actors to be a a driving force for human rights.

Another afternoon took place in the old city of Geneva, with a visit to the International Museum of the Reformation, a discovery of landmarks related to Jean Calvin and the Protestant Reformation, but also a lecture by Michel Grandjean, a renowned Calvin specialist, who explored the conception of the ministry in the writings of the Geneva reformer; before a final meeting with Blaise Menu, the moderator of the Geneva Company of Pastors, who presented the history and current developments of this original organisation. 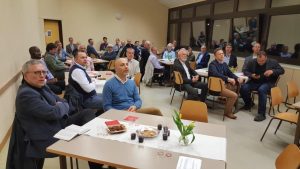 Spiritual times marked this theological meeting, with devotionals leaded by Marius Munteanu and Daniel Duda, the educational leaders of the two European divisions of the Adventist Church; a beautiful holy communion to begin the Sabbath; participation in the Sabbath worship of the Church of Collonges with the sermon of Luca Marulli, the president of the Association of European Theologians; or a very musical end of the Sabbath in the Chapel of the Maccabees, at the Cathedral of Geneva, a high place of the Reformation.

For Gabriel Monet, Dean of the Faculty of Theology of Collonges and coordinator of the conference: ‘These moments between Adventist theologians are precious, not
only for theological stimulation around an important theme, which remains to be explored, but also for fraternity and fruitful exchanges that provide an incentive to pursue
our important teaching ministry for the Church.’